Though a handful of major bugs hold back the PC release a bit, Dark Souls III is a satisfying finale to the monumental series.

In 2009, when From Software’s Demon’s Souls first arrived, it introduced a new formula of action RPG that challenged fans with its punishing structure as much as it intrigued them with its obscurant style of storytelling. Now, seven years later, the Souls series is among the most popular franchises around, and many of its major innovations have spread across the landscape of gaming. With Dark Souls III, From smartly seems to recognize that the series is ready for its final act. Unfortunately, while DS3 is narratively and mechanically a solid conclusion to the series, some major bugs dramatically hurt the overall experience on PC.

When Dark Souls II launched, there was some question as to whether it was a direct, narrative sequel to its numerical predecessor. Any doubt of canonical connection is immediately dispensed with in Dark Souls III, as it quickly sets stakes that long term fans of the series will understand: The first fire that keeps humanity from fading into an abyssal darkness is fading yet again, and the Lords of Cinder--those who had previously done the job of keeping the flame lit--are shirking their duties. As “the Unkindled,” you must bring them into line by doing what you do in every Souls game: Exploring the treacherous ruins of fallen kingdoms, taking down monstrous bosses, and feverishly reading item descriptions to piece together the Whos, Whats, and Whys of everything that’s happening.

Though the Souls games have a reputation for challenge, the truth is that they’ve always been pretty clever about subtly introducing complexity to the player. In some ways, though, Dark Souls 3 feels like it starts at Act 2, tossing you into the deep end much faster than previous Souls games. Within the first half hour, you’ll face a challenging first boss, start planning your character build, and maybe even dig into the weapon upgrading system. It’s a smart decision, since many veteran players are familiar with the basics by now.

This also allows players to concentrate immediately on the new stuff, especially the FP (Focus Points) mechanic. Shoved between the usual health and stamina meters is a new blue bar that is drained whenever players use spells or one of the special abilities attached to every weapon in the game. To keep that blue bar filled, players will have to dedicate part of their stack of healing Estus Flasks to a new type of potion (Ashen Estus Flasks) which can be used to recover that FP. The attacks fueled by FP range from powerful, guard crushing uppercuts to special movement techniques to strategy-shifting combat buffs, and testing out every FP ability I found contributed to the feeling of discovery that I always love in Dark Souls games. These special abilities also open the combat up even further, rewarding tactical consideration and mastery of your chosen weapon.

There are, on the other hand, a number of ways in which Dark Souls 3 represents a less open, more constrained experience than its predecessors--or at least something that feels more constrained. While there’s a huge range of armor, weapons, and spells (including a number of fan favorites from past games), the stat system in DS3 really discourages wild, experimental builds (at least for the first playthrough). Heavy armor users will get knocked around a bit more than in the past, while enemies seem to bounce out of a staggered state more often. Sorceries, pyromancies, and miracles all feel weaker than ever, though as in Bloodborne, magic seems to have a bit more bite in New Game . The result is that balanced, hybrid melee builds do the best throughout the first playthrough--which is great if, like me, that’s what you were planning on playing anyway. Otherwise, though, it could be rough.

It isn’t only the stat builds that can seem constrained, though. While the world has the same geometrically-connected design that so many loved in the first Dark Souls, the opening areas seem more linear than previous games in the series. In actuality, each of the opening zones does have a number of ways through (and out), but it’s not something that is readily apparent in those early hours. Where Dark Souls 1 felt like an intricately designed vertical diorama and Dark Souls 2 was spread out on an impossibly broad plane, Dark Souls 3 gives the impression that it is a line, pulling you from one boss to another, towards finality.

I can’t help but think that this is intentional. It’s no secret that Dark Souls 3 is being positioned as a finale to the series, and throughout the 35 or so hours I put into my first playthrough, there was a constant sense of impending resolution. Though it still primarily delivers its story through its sometimes-obscure use of environmental storytelling and item descriptions, Dark Souls 3 is also perhaps the most straightforward game in the series. You’ll find out what’s happened to some major players in the series’ lore, get confirmation (or denial) of long running fan theories, and even have some pretty metaphysical facts about the world established once and, maybe, for all.

In some ways, this is a disappointment: At its best, Dark Souls has been an unanswered question. I mean this narratively (Whatever happened to Gwyn’s third child, anyway?), but mechanically, too, as each game offers new combat, exploration, and stat-building challenges to solve. But it’s been seven years since Demon’s Souls first confused and intrigued. I’ve gotten better not only at the particular obstacles presented in each game, but also at the process of quickly adapting and learning how to solve this whole subgenre of action RPG.

But there’s another way in which Dark Souls 3 represents an incredible success for From. Like Metal Gear Solid 4, DS3 had the difficult job of addressing lingering questions without becoming a simple interactive epilogue. And it had to do this in the middle of a Dark Souls overdose. Between a strangely over-hyped release of a Dark Souls 3 t-shirt, an Eli Roth-directed cartoon ad for the game, and the endless spread of the "Dark Souls of X” linguistic infection, it might be the case that Dark Souls has finally gotten a little too popular for its own good.

But it does it. It sticks the landing. Dark Souls 3 is able to reference its expansive history to build environments, boss fights, and narrative turns that leverage the last seven years of games, making both thematic allusion and direct, canonical reference to each Souls game and perhaps (if my headcanon is right (and it is)), even to Bloodborne.

Despite the #brand #overdose, DS3 is a reminder of why the familiar elements of Dark Souls have always worked so well: Poison areas still shake up your usual strategy of attacking and spacing because of the constant health loss; processions of enemy groups walk through the winding streets of a splendored city, demanding you to carefully pull one at a time else risk a running battle against an overwhelming force in an unfamiliar place. And there’s more, too. The clanking of sinister mechanisms; the resigned laugh of a coward; the peculiar side quest that seems to suddenly stop… only for you to find the grisly conclusion hours later while revisiting an already cleared location.

Dark Souls has always been a series interested in the blurry memory of history, and now it has its own massive history to allude to. There was a moment towards the end of the game that made stop in place and just soak in a particular arrangement of fortifications in front of me. Was that.... I’d been there, I think, once, a long time ago. Or had the curse finally taken me, too? It was one of the most magical moments of the series for me, but in the way that in Dark Souls, “magical” means an uncanny blend of beautiful and disorienting.

Less beautiful (but still disorienting) are the crashes, at least on the game’s PC build as of launch. As a lot of folks have reported already (and as you can see in our pre-launch stream from a couple of weeks ago), Dark Souls 3 has been an unstable experience for many players. Approaching a new bonfire or loading into one and then quickly running away form it can cause a sudden hard crash, even for those who meet the game's system requirements. And it's worth noting that I also had crashes far away from bonfires during my playthrough.

Some of these were reproducible--I couldn’t use an early game magical sword with a special aura without crashing, for instance. Other times, though, the game would crash without any clear cause. Though the number of crashes reduced over the course of my play time (and, strangely, my NG character no longer crashes in areas that he did 40 hours ago), it was the fear of crashing that I could never shake. Dark Souls 3 is already an incredibly tense game--”will I be killed by whatever that is?”, “Is my build right for this boss?”, “Where the hell am I going in the dark and muck?” But that tension slides from “fun” to “frustrating” when I also have to ask “Will I randomly crash in the middle of this boss fight?” And the answer, at least twice, was “Yes, I will.”

Early reports indicate that setting the lighting to low seems to hold at least some of the instability at bay, but it’s especially frustrating because the game otherwise runs well for me on my Nvidia GTX 760 with High settings. I can go hours and hours with only the occasional hiccup, and then suddenly I'm looking at my desktop wallpaper and left to wonder about where DS3 will decide to put me when I load back in. That said, it doesn't seem like this is a fundamental problem with the game's engine, and hopefully we'll see a fix issued sooner than later.

Thankfully, the console versions fare much better in terms of stability. On PS4, it runs at least as smooth as Bloodborne did and with much faster load times (with the trade-off of occasionally slow-loading textures.) On Xbox One, Dark Souls III runs at a noticeably choppier frame rate and a slightly lower resolution than the PS4 build, but it's still very a playable and stable and solid port of the game.

It’s easy to recommend Dark Souls 3 on consoles with a single caveat: Much of what makes it work so well is the way that it does justice to the series’ own past, which just won't mean much for folks hopping onto the Souls train for the first time. My recommendation for the PC build has to come with a firmer qualification. Yes, I still really enjoyed my time with Dark Souls 3 on PC. Yes, I’ll probably play through at least one run of NG . But my enjoyment was seriously impacted by the unpredictable performance and crashing.

If you’ve stuck it out this far (and especially if you actually care about the world and lore of Dark Souls), Dark Souls 3 will prove to be a satisfying coda to your time with the series. I can’t wait until the community goes into full lore-speculation and secret-finding modes. If Dark Souls needed to end--and all signs point to "Yes, it did"--I’m glad it was able to do so with such singular focus and form. 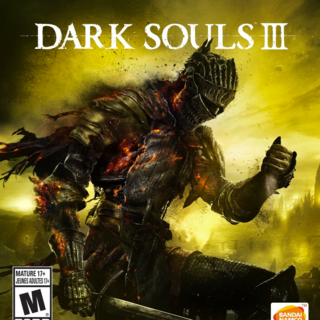 This game melds elements from all previous Souls games and concludes the Dark Souls trilogy.