Superhot is an intense and thrilling blend of action and puzzle with a solid bit of narrative to tie its murderous mysteries together into something worth seeing. 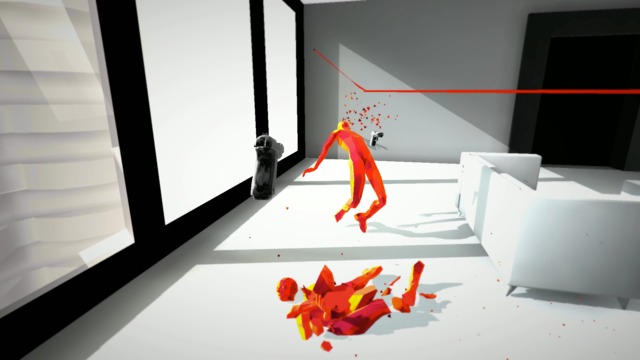 Superhot began as a quick prototype with a cool mechanic, and now it's been blown up into a full-fledged PC release that refines and expands upon that initial concept in some cool ways and wraps it all up in an enjoyable premise. It'll also unlock some good, repeatable modes after you complete its story.

Time is (mostly) on your side in Superhot. Time is slowed down to an absolute crawl when you stop moving, effectively letting you pause, scope out your surroundings, and plan your next moves. Your goal is to eliminate all of the enemies in a level without getting hit yourself. So you can inch along, plotting out a path of murder that dodges every bullet and takes down every opponent. If you fail, you restart the entire level. If you succeed, the game shouts SUPER! HOT! at you over and over again until you decide to move on. It also shows you a real-time run of your play, which makes it look like you're some kind of stylish action movie bad-ass.

The game rarely gets too thought-provoking in its 32 main levels, but figuring out the right steps to take in each situation is really thrilling. It also sets you up over and over again, with levels that have you, for example, starting out trapped in an elevator with three armed enemies. Can you punch one, grab his gun out of the air, use it to shoot the one of the others, and then hope that the last armed enemy fires his gun into the enemy you punched and stunned, giving you time to recover from the pistol's recoil and get off another shot? Or maybe you should just throw the damned pistol in that other guy's face, stunning him and giving you a little more time to react. Oh, by the way, when the elevator door opens, there are two guys with shotguns standing right outside. Good luck.

The levels themselves can be phenomenal, but it really helps that there's an interesting premise to string you along from one situation to the next. It seems that you're playing a hacked game that some chat friend sent your way. You'll have access to a little ASCII-based (but still mouse-driven) OS that lets you poke around, play some silly little ASCII games, and jack you back into your stolen Superhot executable. The way the game uses this OS and the way it twists and turns it over the course of the game is really great. Though it might not be focused on telling you some huge, complete story, the little bits it gives you about the nature of the game you're playing and the world itself are enough to get your mind going and enough to give it a surprisingly satisfying conclusion. You'll feel like a bad-ass in the levels themselves, but there are also some stellar moments to experience for yourself along the way.

Upon completing that progression, you'll unlock an endless mode that has various modifiers, letting you try to kill as many red dudes in 60 seconds of game time, or real time, or only using a sword, and so on. The endless modes spawn enemies into the world in waves and, as you might expect, it gets tricky fast.

The action in Superhot is highly stylized, with stark white backgrounds that make the glowing red polygons of the enemies stick out in dramatic fashion. Items you can grab, like swords, bottles, pool balls, and so on, show up in black. It's a great look, especially as the enemies shatter apart into a mess of dissipating polygons whenever you deliver a killing blow. Outside of the action, the ASCII terminal has curved, tube TV-like display and a great phosphor glow that, when combined with the other details you're fed about the nature of things, makes it all feel like some weird, old '90s cyberpunk take on online communication, VR, and what it means to be connected. These disparate parts come together and come alive in some really exciting ways that I'll let you find for yourself.

Upon completing a session, as your run plays back in real-time, you can use some rudimentary editing tools to save a clip of the action, which gets rendered out into a looping animated GIF sort of presentation and posted to Killstagram, the game's real, online service devoted to showing and sharing these short clips. This seems like it could be an effective way for the game to get out to more people, since some of these clips already look pretty amazing. They're also good for catching bugs, like the one time an unarmed enemy just kinda started marching in place on me, letting me run circles around him for awhile until deciding to throw a baseball bat into his stupid face. Even that was... strangely satisfying.

All told, there's a few hours of action here before you unlock the endless modes, and those modes may very well keep you coming back for many, many more hours. It's a bit of a shame that there isn't slightly more to the core story progression, and the game could be better about surfacing high scores on a leaderboard or other details that might help make the main levels a bit more repeatable on their own. I breezed through that core progression in an afternoon, but enjoyed its little story hooks so much that I immediately started playing through it again to watch it all unfold and see if I missed any little clues about the world of Superhot. It's a strong action puzzle game with some incredibly tense moments that are certainly worth seeing for yourself. 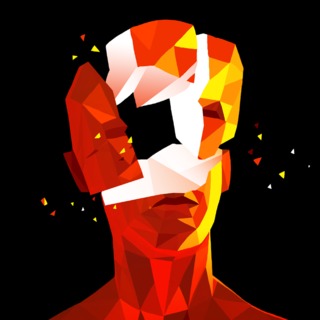 SUPERHOT is a puzzling first-person shooter where time progresses as the player moves.